“I remember when ……the floods hit Tarland”

On 30th December 2015, the powerful storm “Frank” swept across the country and delivered high levels of rainfall in the borders and in the north east of Scotland. It flooded parts of Ballater. The force of the water and speed with which it rose can be seen in these dramatic pictures taken of the bridge at Dinnet. There is a difference of three hours between the two pictures.

On New Year’s Day, the rain started again and was heavy over the weekend. By Monday the Tarland Burn was flooding in Tarland and the bottom half of the Howe between Tarland and Coull was heavily flooded. The Tarland golf course near Alastrean House was also heavily flooded. Alastrean House itself had sustained a fire on 2nd. January and all the residents had to be evacuated. 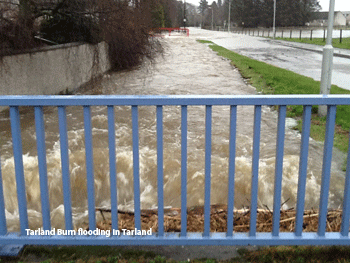 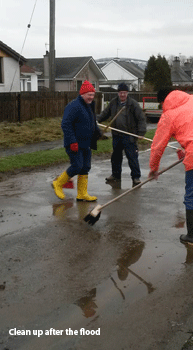 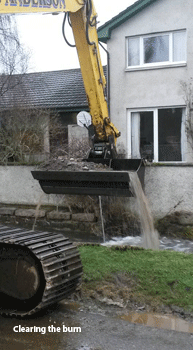 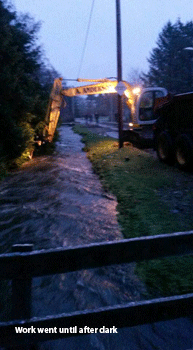 The sun finally made its first appearance of the New Year on 8th. and the clean up began.The rain continued, concluding with a particularly severe rainfall on Thursday 7th. By this time, the flooding was extending right up the Howe from Coull to Tarland.
This was the worst day for flooding in Tarland. Many houses narrowly escaped the floods, but the burn overflowed sending water cascading behind the houses in Bridge Street. The last house was flooded.

Ally Anderson and helpers removed over 80 trailer loads of gravel from the Burn working on into the evening to get the road clear and the water away.

The sun finally made its first appearance of the New Year on 8th. and the clean up began.