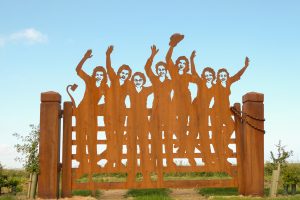 A group of CHG members had a fascinating trip by car & foot to explore the coastal heritage of parts of Moray & Aberdeenshire.

En route to the coast we stopped at the recently opened memorial to the Women’s Land Army sited close to the village of Clochan (north of Keith), then we drove through some of the fishing villages of Moray noting the tightly packed terraced fishermen’s houses, fronting straight onto the pavements. 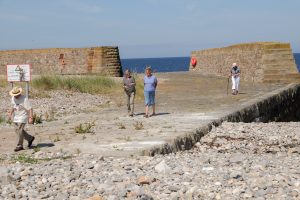 First was Portgordon and next we stopped at Buckpool to have a look at the mid 19th century granite walled harbour that soon after opening started to block up with all the pebbles that got swept in by the sea.  This harbour was replaced with the harbour at Buckie which we drove past. 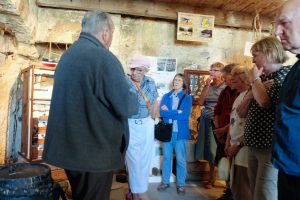 Then on to Cullen where we had a picnic lunch and walk along the wonderful beach, where holiday-makers were already sunbathing!  After lunch we spent the afternoon at Portsoy  a visit to the salmon bothy at Portsoy , the boatshed where they re training many youngsters to build boats and finally we were treated to afternoon tea at a hostel behind the beach.  All these enterprises have been created by the Portsoy Community Enterprise.  Our visit was just 1 week after the vibrant Portsoy Boat Festival and our thanks go to the community for spending the time with us.