Fifteen members gathered for a sunny, Sunday afternoon trip to Donside to visit the historic churches of Kildrummy and Glenbuchat.  We were led by Allan Hepburn, a CHG member, who had also carried out work on behalf of the Aberdeen & North East Family History Society in transcribing the gravestones in Kildrummy Kirkyard to produce a booklet to preserve the information on the stones before the inscriptions are lost to the elements and also to help those with genealogical interests.

We firstly explored Kildrummy Church which is now owned and maintained by Historic Churches Scotland (formerly The Scottish Redundant Churches Trust) having acquired it from the Church of Scotland General Trustees in 2009 for £1.  It was built in 1805 and replaced an earlier church which stood on the mound within the old kirkyard – the north and east walls is all that remains of it.  It was rumoured that when the Kirk was built in 1805, the plans were mistakenly mixed up with that of a mill which was to be built locally.  Construction commenced and was too far gone before the mistake was realised so had to continue building.  Whether this is true or not is left up to the individual to decide, but it may perhaps explain the rectangular plan with bow front. 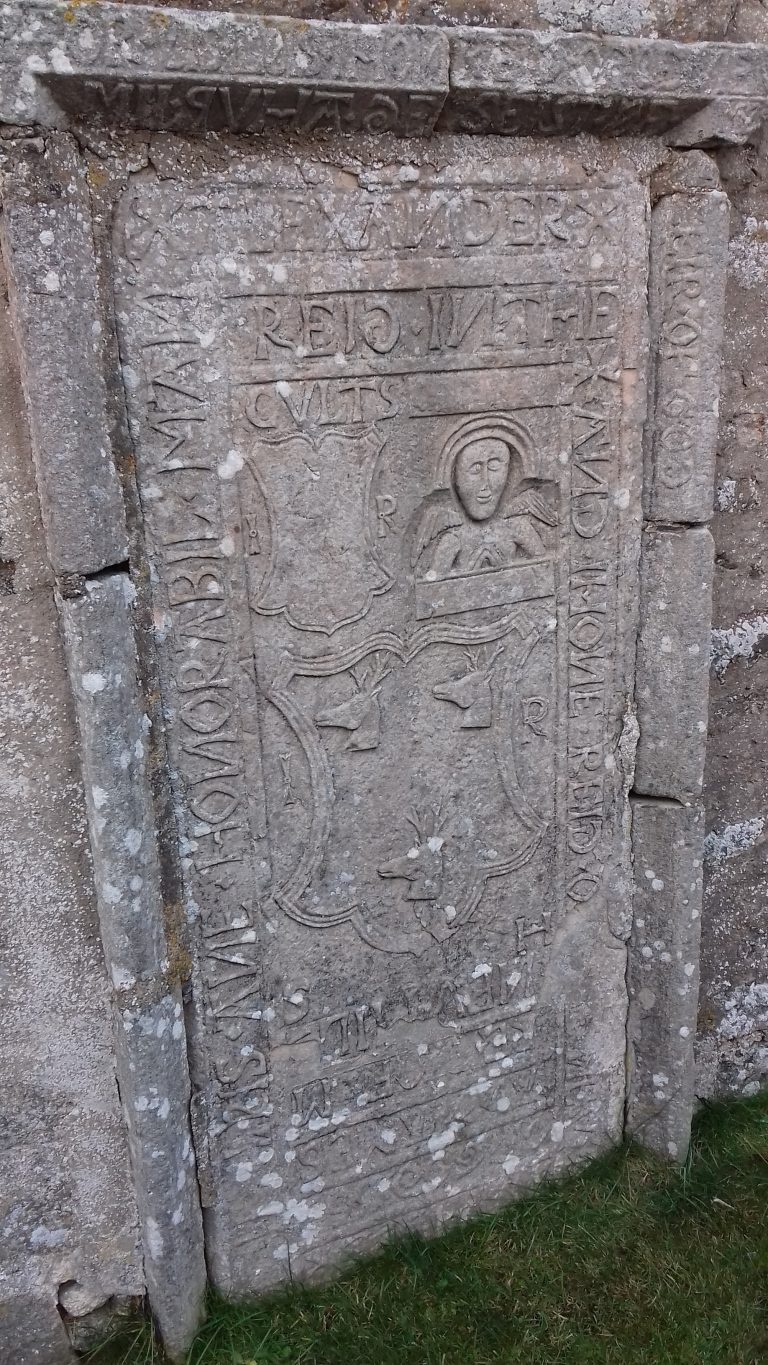 Next we explored the old kirkyard where Allan pointed out some stones of interest, including that of Michael Dunbar who died in 1722 aged 100 who was made ‘Captain’ of the parish, or leader of those who – as was essential in those times – combined to protect their lives and property against the incursions of the Cateran, or Highland robbers.

The grandparents of James Leslie Mitchell – better known as Lewis Grassic Gibbon – are also buried at Kildrummy, and it was from the name of his grandmother, Lilias Gibbon née Grassick, that he took his pen-name.

The remains of the North wall of the old church contain an arched recess, believed to be a rare Scottish example of an Easter Sepulchre.  The recess now houses a tombstone with the effigy of Alexander, 3rd Laird of Brux and his wife Mariota, hands clasped in prayer with a Latin inscription dating to circa 1550.

We spent about 1½ hours at Kildrummy before heading to the nearby parish of Glenbuchat.   We arrived at Glenbuchat Bothy first and were greeted by Peter Duffus.  Peter is the administrator of the Glenbuchat Heritage website (http://www.glenbuchatheritage.com) which houses a large archive of photographs, artefacts and stories relating to the area.  We were treated to a much welcome cup of tea and beautiful home baking prepared by Peter and his wife before Peter began a presentation of a visual tour around Glenbuchat, displaying some old photographs from around the Glen and providing stories to match.

After this we visited the old Kirk.  The original Church dated from circa 1473, but was rebuilt in 1629 and again in 1792.  The interior has remained largely unaltered since then, with the exception of the addition of the Lairds Loft at one end of the Kirk in 1828.  The floor is interesting as it is stone paved along the main aisle, cobbled amongst the pews surrounding the pulpit, and wooden in the box pews along the north side of the church.  These box pews are known as ‘pumphals’ a type of pew which is now almost obsolete and are such that the partitions between them can be removed and the small tables of the pews set together to form one long Communion table.  Overall Glenbuchat is one of the best examples of a Scottish country Kirk to survive from the late 18th century period.